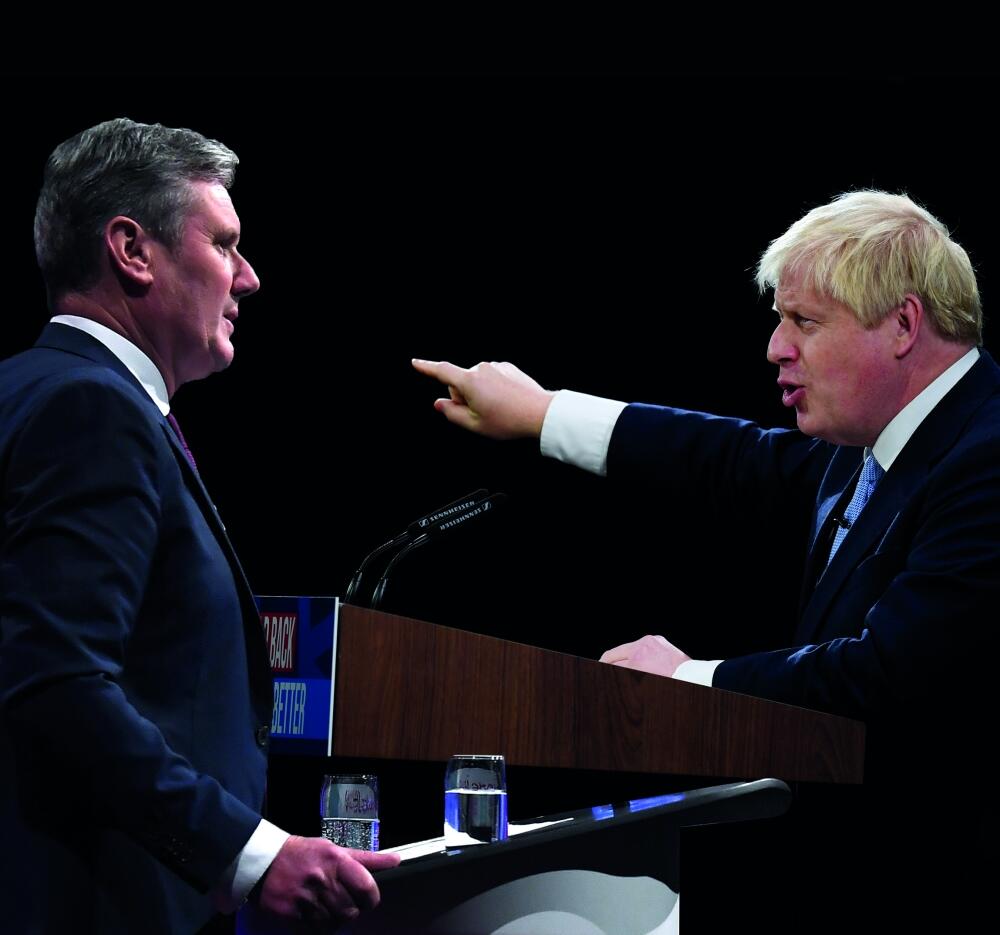 Just under two years ago, the Labour and Conservative parties headed towards a general election as far apart on tax policy as at any time since the early 1980s. An election, a pandemic and a Labour regime change later, things look somewhat more complicated. Conservative government plans would take the tax burden to its highest level since 1950. Two of the biggest increases are opposed by Labour, who have rowed back not just on the tax rises in their 2019 manifesto but on the pledges that Keir Starmer made during the 2020 leadership election. So what can this autumn’s party conferences tell us about the parties’ direction of travel?

Reform of business taxation was at the heart of the economic agenda set out by Labour in Brighton at its first face to face conference in two years. Shadow chancellor Rachel Reeves promised the party would ‘tax fairly, spend wisely, and get our economy firing on all cylinders’.

In his leader’s speech, Keir Starmer said Labour’s approach to taxation would be governed by three principles: the greater part of the burden should not fall on working people; the balance between smaller and larger businesses should be fair; and value for money.

What does this mean in practice? Well, the first is a clear reference to Labour’s opposition to the national insurance increase and the health and social care levy. They have not said explicitly what they would put in their place, just that they would make ‘those with the broadest shoulders’ pay. In an interview at the start of the conference, Reeves identified ‘people who get their incomes through stocks and shares and buy-to-let properties’ as targets.

Taxing capital gains and dividends at income tax rates with a single allowance is one 2019 Labour policy whose future looks uncertain under the new management. Another is raising income tax for those earning over £80,000 a year. Starmer was asked about this by the BBC during the conference and determinedly kept his options open, saying nothing was off the table but nobody knew what the state of the national finances will be at the election.

Starmer’s second principle – ‘a fair balance between small and large businesses’ – was symbolised by a proposal to scrap business rates and raise the digital services tax, as part of what Reeves called ‘the biggest overhaul of business taxation in a generation’. The central theme of the overhaul seems to be rebalancing the tax burden away from high street businesses and onto large tech firms. While Reeves did not specify what business rates would be replaced with, it appears it would continue to be a levy based on property values, as she said it would reward businesses that move into empty premises.

The third principle – value for money – is part of the effort to persuade onlookers that, under its new regime, Labour would be a careful custodian of public money rather than reaching for a tax rise at every opportunity. Little flesh has been put on the bones of this so far, beyond Reeves’ announcement that the party would review ‘every single tax break’. (Do they know there are 1,190?) There are two they would ‘scrap straight away’: the carried interest ‘loophole’ that enables private equity bosses to pay tax at capital gains rather than income tax rates; and the exemption from business rates and VAT that private schools enjoy because of their charitable status. On first analysis, arguably neither of these is an actual scrapping of a relief. Rather Labour appear to be proposing to reclassify ‘carried interest’ as income rather than a capital gain, and to remove the charitable status of private schools so they no longer get the tax breaks associated with that.

Chancellor Rishi Sunak put fiscal responsibility at the heart of his conference necessity by telling party members that he knows tax rises are unpopular, but would do ‘whatever it takes’ to fix the public finances.

Going into the Manchester conference, there were predictions that members’ antipathy to tax increases would result in angry exchanges. But this did not happen. This is largely down to the high standing of the prime minister and chancellor within the party, and trust that their instincts genuinely are, as they maintain, to cut taxes as soon as they responsibly can.

To help this along, a convenient Sunday Times story published on the first day of the conference claimed that the prime minister and chancellor ‘have struck a secret deal to cut taxes’ before the next general election in exchange for spending restraint now. This helped to maintain party unity during the conference. Any criticism that was heard was mostly coded and framed in terms of the need to avoid further increases and to seek tax cuts sooner rather than later. Cabinet members Liz Truss, Kwasi Kwarteng and Jacob Rees-Mogg all joined this contest, seeking the prize of being seen as the government’s low tax champion.

The omnipresent mantra at this year’s conference was ‘levelling up’, which was applied to everything from the justice system to the hospitality sector. But what does it mean for tax?

Not increasing tax on the low paid, according to a group of Conservative MPs who met with Boris Johnson ahead of the conference. Jake Berry, chair of the Northern Research Group, wondered ‘how you can level up deindustrialised and poorer communities in the north of England, while at the same time taking cash out of their pockets through a national insurance rise and cuts in universal credit’.

By prioritising poorer areas, and spending more/taxing less in them, according to some. At a fringe debate, Bim Afolami MP said that levelling up will only mean something when people do not need to leave the areas they grew up in to ‘get on in life’. He mooted lower rates of national insurance for hiring people in certain parts of the country.

Rebalancing property taxes so the south east of England pays more and other areas less, is another answer. Reform of business rates was a popular call from Conservative MPs ahead of the report expected on Budget day. Additionally, eight Tory MPs have backed the Fairer Share campaign to replace council tax and stamp duty land tax with a proportional property tax.

Or perhaps it means devolving more fiscal powers? A number of Conservatives have argued for more taxes to be raised and spent locally. Indeed, Boris Johnson expressed support for this when he was Mayor of London. Reportedly, a white paper on devolution due this year has been elbowed aside by one on levelling up. But might it include some decentralising moves?

In his leader’s speech, Ed Davey promised that the Lib Dems would be the champions of small business, offering them ‘a radical fair deal … where business rates are replaced with a land tax; where the tax-free allowance against employers’ national insurance is raised substantially; and where the biggest businesses pay more tax’.

In support of the latter, the online-only conference saw party members back tougher rules on a global minimum rate of corporation tax. This included profitable subsidiaries of large groups paying the tax in their own right, so the groups don’t escape the minimum rate because they fall short of the 10% profit-margin threshold. The party also called for the extension of coronavirus economic support measures, including extending the Self-Employed Income Support Scheme to cover currently excluded groups.

Green taxes and carbon pricing were notable in their absence from discussions at Labour and Conservative conferences, but the Lib Dems debated and adopted a chunky policy paper, proposing a strategy based around strengthening the UK Emissions Trading System (ETS), raising the price of allowances and linking it to the EU ETS. This marks a break from the party’s former support for a single, economy-wide carbon tax. They believe that ETS targets the biggest producers of emissions more effectively and enables a phased approach, with ETS only extended to domestic gas once an emergency programme of home insulation has been carried out.

A year ago, the Lib Dems backed the principle of a universal basic income. This year, party members discussed a proposal to abolish the income tax personal allowance and national insurance primary threshold for working age adults, and set an introductory universal basic income rate equivalent to the full value currently gained by basic rate taxpayers from these allowances (around £71 per week), with the intention of raising it thereafter. Based on feedback, a full policy paper will be presented to a future conference.

SNP leaders used a virtual conference in September to make the case for more ‘progressive’ tax reforms. First minister Nicola Sturgeon said that ‘with very limited tax powers’, the party had ‘introduced an income tax system with fairness at its heart’, while the party’s Westminster leader Ian Blackford said the national insurance change was ‘one more reason why our future must be independent, giving us the power to deliver progressive taxation’.

The party was returned to Scottish government in May on a manifesto committing largely to maintain the status quo within the current devolved tax system. But a partnership agreement with the Scottish Greens could result in a further push to reform council tax, a reform that has largely eluded successive Scottish administrations.

The SNP also has ambitions for the Scottish Parliament to have complete control over the tax system. They will demand the devolution of full powers over VAT, income tax and national insurance in the upcoming fiscal framework review.

So where does this leave us? You could be forgiven for feeling a little disoriented. We have the strange spectacle of a Conservative government raising taxes (and not only for pandemic related reasons) to a level few of its members are comfortable with, while insisting that they remain the party of low taxes. Meanwhile, the Labour Party, by dropping much of its own tax-increasing agenda and opposing Conservative rises, has made itself harder to pin down.

What is left is an asymmetric contest which the Conservatives present as being between higher and lower tax aspirations, while Labour try to persuade us it is about fairness, the Lib Dems seek differentiation by appealing to small business and the self-employed, and the SNP frame it as a battle for power within the UK.

A combination of the pandemic, Brexit and electoral realignment has shaken up the kaleidoscope of UK tax and wider economic policy. The pieces are in flux. It is far from clear how they will settle.

Full reports on each of the party conferences’ tax discussions can be read on the CIOT website: tax.org.uk/blog/1

George has managed the CIOT and ATT's political and media relations since September 2009. He blogs on the CIOT website and tweets at @GeorgeTweetsTax

The 2022 party conferences: a bloody battleground