We examine the changes to the duty structure for alcohol that are to be introduced by the new Alcohol Duty Bill, as well as the reduced rates for smaller producers and low alcohol products.

The Alcohol Duty Bill planned for the next Finance Bill will repeal the Alcoholic Liquor Duties Act 1979 to bring into effect a new alcohol duty structure and replace archaic law.

The new Act will make changes to the duty structure for alcohol, moving from product-specific duties and bands to (nearly) a single duty on all alcoholic products and a standardised series of tax bands based on alcoholic strength.

As well as a new duty structure, the current fragmented law for approval of alcohol producers will be much simplified under a fairer uniform ‘drinks factory’ approval in a modernised and simplified package.

Many years ago, HM Customs and Excise’s Revenue Duties Divisions found themselves relocated from the South Bank of the Thames to the south bank of the River Irwell. There was an ongoing major programme called the Excise and Inland Customs Strategy to bring the (mainly excise) control in line with then best practice in indirect tax; namely, systems-based controls.

In 1995, a key objective was to replace the consolidated 1979 excise duty Acts with a modern, simplified and unified Act, encompassing all the excise products (alcohol, tobacco and hydrocarbon oil), their classification, duty rates and simplified administration. The project was derailed when Labour took office in 1997 and had no legislative space for such a big change.

However, a few years ago, Boris Johnson’s government committed to a ‘fairer’ alcohol tax system, free from the constraints of EU law (which was largely based on what had been UK law). There was intense lobbying from the big spirits industries for a lower spirits duty rate, or equivalent taxation with other alcohol products. This led to the Alcohol Duty Review in 2020, and to a draft Alcohol Duty Bill which when enacted will repeal the Alcoholic Liquor Duties Act 1979 and be the first of the excise product taxes to be modernised.

As an overview, the Alcohol Duty Bill has a simplified structure and has discarded otiose law that clutters up the Alcoholic Liquor Duties Act 1979. It also incorporates fragmented excise legislation, such as duty drawback provisions and alcoholic ingredients relief to relieve excise duty on alcohol used in soft drinks or food manufacture. Alcoholic ingredients relief is currently contained in Finance Act 1995 s 4.

‘Alcohol’ is defined succinctly as ‘ethanol’ but an alcohol product is not subject to duty if it does not exceed 1.2% alcohol by volume. The alcohol product classifications are identified in the initial clause of the Alcohol Duty Bill and specifically defined by reference to a schedule. HMRC can change or add classifications by means of regulations.

The historic definitions under the Alcoholic Liquor Duties Act 1979 are retained for spirits, beer, wine and cider. However, the definition of ‘made-wine’, a confusing term, will be changed to ‘other fermented products’, which is also the heading of 2206 for the Harmonized System for such products.

What is really significant is that under Chapter 5 of the Alcohol Duty Bill, producers of all alcohols in duty suspension may be authorised by HMRC to produce and store any type of alcohol ‘under the same roof’ – what we called a ‘drinks factory’ 30 years ago. An authorised manufacturer of alcohol products may also receive equivalent bulk goods to package in the approved premises (currently restricted to brewers).

The ‘drinks factory’ will encompass traditional distillers and maturation processes, as well as the production of gin or flavoured alcohol (‘rectifying and compounding’) from high strength grain neutral spirits. Currently, such maturation and production has to take place in a highly regulated excise warehouse approved by HMRC either under the Alcoholic Liquor Duties Act 1979 s 15 or the Customs and Excise Management Act 1979 s 92.

This consequentially means that there will no longer be the archaic requirement for the licensing of distillers, rectifiers/compounders of spirits, wine producers and made-wine producers. Similarly, the rectifying and compounding of duty-paid spirits (e.g. to make gin outside duty suspension) will no longer require a licence or the ‘making of an entry’.

The details of the registration and approval of alcohol producers will be by regulations. According to HMRC, there will be a single duty return for all products that are released to home use (i.e. at the duty point) and with the duty ‘deferment’ period for payment to be a maximum of six weeks. (This is the period for beer duty and will extend by two weeks the current deferment period for wine, made-wine and cider, and for spirits released from an excise warehouse.)

The potential fly in the ointment will be any requirement for a deferment guarantee, which spirits businesses in particular may not be able to provide due to cost of indemnifying the guarantor. There will need to be an option (as currently) to ‘pay on the day’ when goods are released for consumption (or ‘brew by brew’ as it is called in the beer regime).

As is the case under the Alcoholic Liquor Duties Act 1979, alcohol products will be charged with duty when they are produced in or imported into the UK (subject to reliefs or exemptions for qualifying products such as ethanol used for scientific purposes). The applicable rates of duty are set out for all products in a schedule, except for products that are subject to small producer’s relief and relief for product in draught (i.e. larger containers for use in the ‘on’ trade), which are subject to individual clauses.

The new alcohol duty rate and reliefs will take effect in August 2023. There still isn’t uniformity of tax treatment for alcohol products but, overall, things are much fairer. The structure is actually fairly simple with four duty bands in which rates for each product are to be applied: 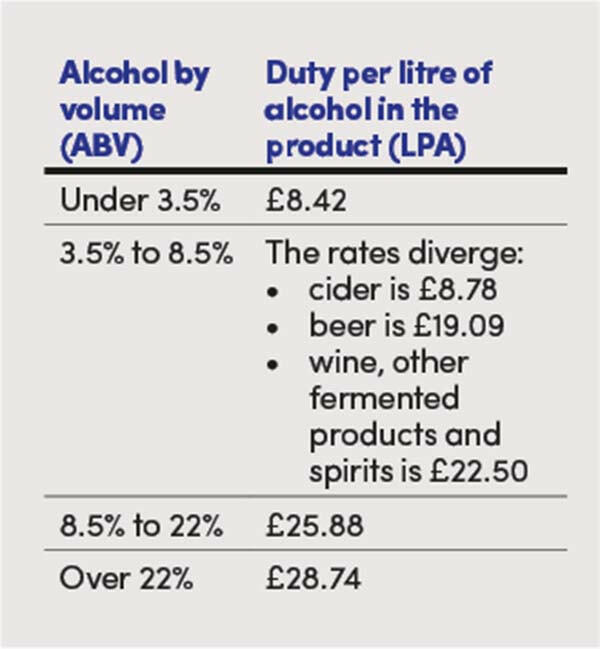 ‘Plain’ cider has a very significantly lower duty rate than other product; however, flavoured cider will still be classified as a ‘made-wine’ and taxed at that much higher rate. There will also be transitional provisions for a period of 18 months to enable wine of fresh grape between 11.5% and 14.5% ABV to adapt to the strength-based system.

The Bill introduces a relief that applies to all alcoholic products under 8.5% ABV intended to be sold ‘on draught’. This relief is relatively straightforward, applying a small duty reduction on products which, at the excise duty point, are packaged in large draught containers (minimum 20 litres capacity).

The Bill also replaces and extends small brewers relief with a small producer relief that will apply to alcoholic products under 8.5% ABV, produced by those making less than 4,500 hectolitres of pure alcohol per year.

The provisions take up considerable space in the Bill and the details are complicated. All products under 8.5% ABV will be eligible; therefore including beer, cider, flavoured cider and other fermented products (and some ready-to-drink spirits) but excluding wine of fresh grape and full strength spirits. The Treasury has indicated that producers of ready-to-drink spirits made from ‘bought in’ high-strength spirits would already benefit from the benefits of scale of the original large producer/supplier, so may be excluded from small producer relief. It will be taking views from the industry.

The other contentious element to small producer relief is that all alcohol production is to count towards the maximum production (the ‘taper calculation’), instead of each type of product having access to the relief. This means that a small brewer who also produces spirits would have to total all the litres of alcohol produced and could exceed the taper.

Finally, it should be noted that the excises warehousing regime provided for by the Customs and Excise Management Act 1979 s 92 (‘bonded warehousing’) will not be changed fundamentally, since excise warehouses enable private and third party duty suspension for all excise goods, not just alcohol after production. Excise warehousing is a crucial element of alcohol, tobacco and, in particular, hydrocarbon oils storage on import or immediately after refining.

The changes won’t be to everyone's liking but if it’s not a wholly brave new world, it’s a less timid one and generally fairer and clearer. I’ll drink to that!

Alan Powell is a specialist Excise Duties Consultant who, in his 65th year, is trying to retire. He worked within HMC&E’s HQ policy division and a Big 4 Tax team.

This is not a drill! 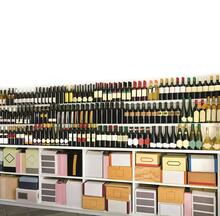 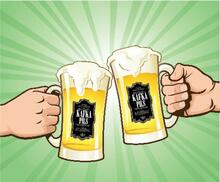